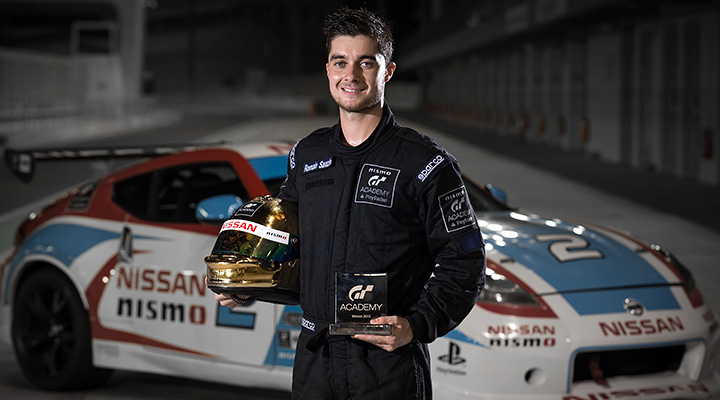 Romain Sarazin was crowned GT Academy Europe 2015 champion after winning the inaugural race camp to be held at the stunning Yas Marina Circuit in Abu Dhabi.

His passion for cars and motorsport stems from a competition he entered in France to win a season of rallying. Despite having only just passed his driving test, he beat seven hundred contestants to reach the final but unfortunately wasn’t able to secure the main prize. However in realising he had a natural talent to drive, Romain vowed to do everything he could to pursue his dreams and enter the world of motorsport.

Before entering GT Academy in 2015, Romain was a fourth year student at university studying economics and management. He lived at home with his parents and worked during the holidays in order to save enough money to buy and maintain a car. After university Romain was hoping to start his own company, either in motorsport or relating to cars, which would enable him to fund his appetite to race.

Romain qualified for race camp in Abu Dhabi via the online format of GT Academy on Gran Turismo®6. Throughout the eight day competition, Romain performed consistently well in the searing heat and across a variety of tasks including an assault course, drag race, street race and sand buggies. Having made it through to the final two contestants representing France and after qualifying their car in second position on the grid via an online Gran Turismo e-gaming format the evening before, Romain was chosen to take the hot seat for the final eight-lap race around the Yas Marina Circuit in Nissan 370Z race cars. Romain’s reaction to the green light was quickest, giving him a fantastic start and allowing him to dive down the inside of the pole sitter from the UK in to the first corner. From there Romain took control of the race, extending his lead throughout and setting the fastest lap before taking the chequered flag to be crowned 2015 GT Academy Europe champion.

Romain has since been based at Silverstone to take part in an intense Driver Development Programme (DDP) that will teach him race craft, improve his fitness to the necessary level and develop his psychological and mental strength required to race professionally. Once he has achieved his International C Race License he will find out what his first year of motorsport holds for him.

This is the beginning of the road for Romain to accomplish his dream of reaching the highest level in motorsport and to follow in the footsteps of previous GT Academy winners by racing in 24 Hours of Le Mans and at the Nürbürgring.