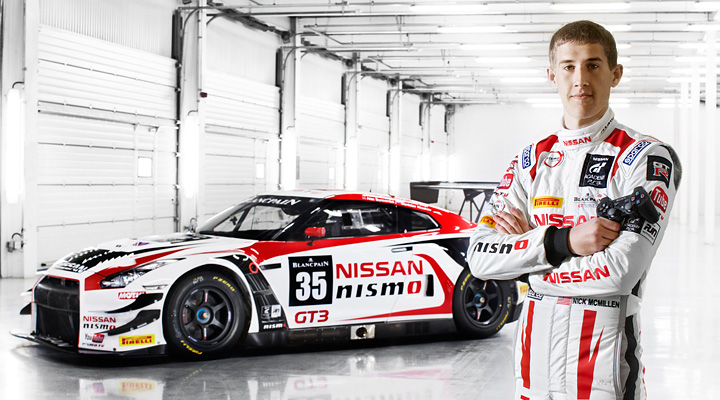 Nick was working as a car salesman when he won GT Academy North America 2013. Having spent his childhood competing in motocross and playing Gran Turismo®, Nick has racing coursing through his veins. But racing a car was something he hadn't experienced before GT Academy.

Immediately after winning GT Academy USA, Nick moved to Silverstone for three months in order to complete an intensive Driver Development Program. He spent this time working on and off-track to refine the skills needed to compete with the best international drivers out on the track, and he loved learning new skills every day. In January 2014, Nick joined his 2013 GT Academy winners on the top step of the podium after taking a dominant class victory at the Dubai 24 Hours. The 2014 season sees him racing a Nissan GT-R GT3 in the Blancpain Endurance Series.

Moving from racing cars in the virtual world to racing them on real tracks is a dream come true for Nick. Ever since he was little he has wanted to be a racing driver and GT Academy has given him the opportunity to make this a reality. Nick’s ultimate ambition is to reach Formula One®, and he’s relishing the chance to work his way up the motor sport ladder as a NISMO Athlete.

When he’s not training at Silverstone or racing across the world, Nick’s need for speed means that he spends his time at home snowboarding and downhill mountain biking!