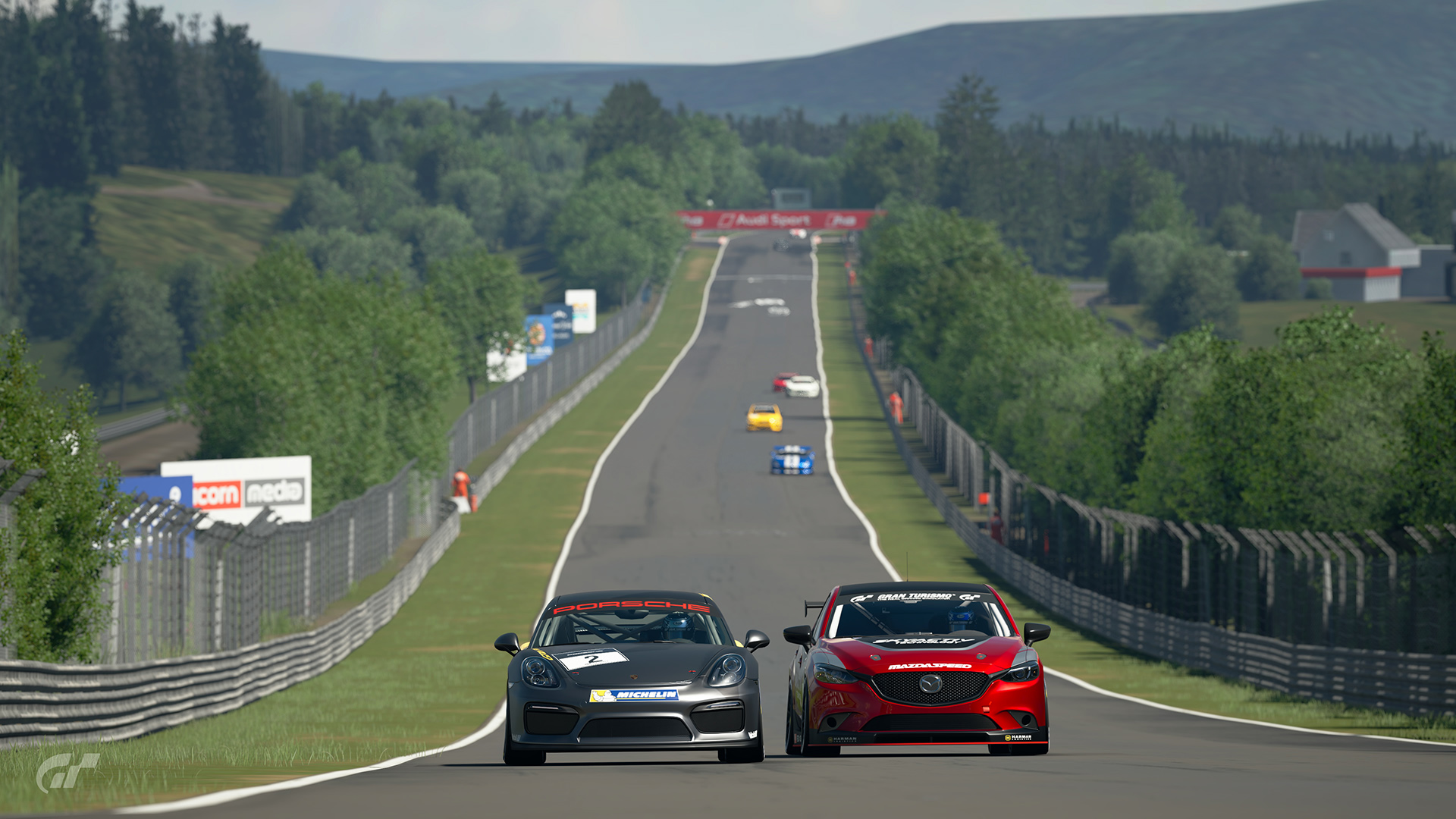 Tokyo, Japan (14 November, 2021) – Representing the last round before the World Finals, Round 4 of the 2021 FIA Certified Gran Turismo Championships was filled with the intense action and drama that we have come to expect from the highly entertaining World Series. For this round, the venue was the legendary Nürburgring Nordschleife, a 20.8-kilometre circuit situated in a forest near the town of Nürburg, Germany. The track is home to the 24 Hours of Nürburgring endurance race and is also the preferred testing facility for the world’s manufacturers to gauge the limits of their sports cars and race machines. 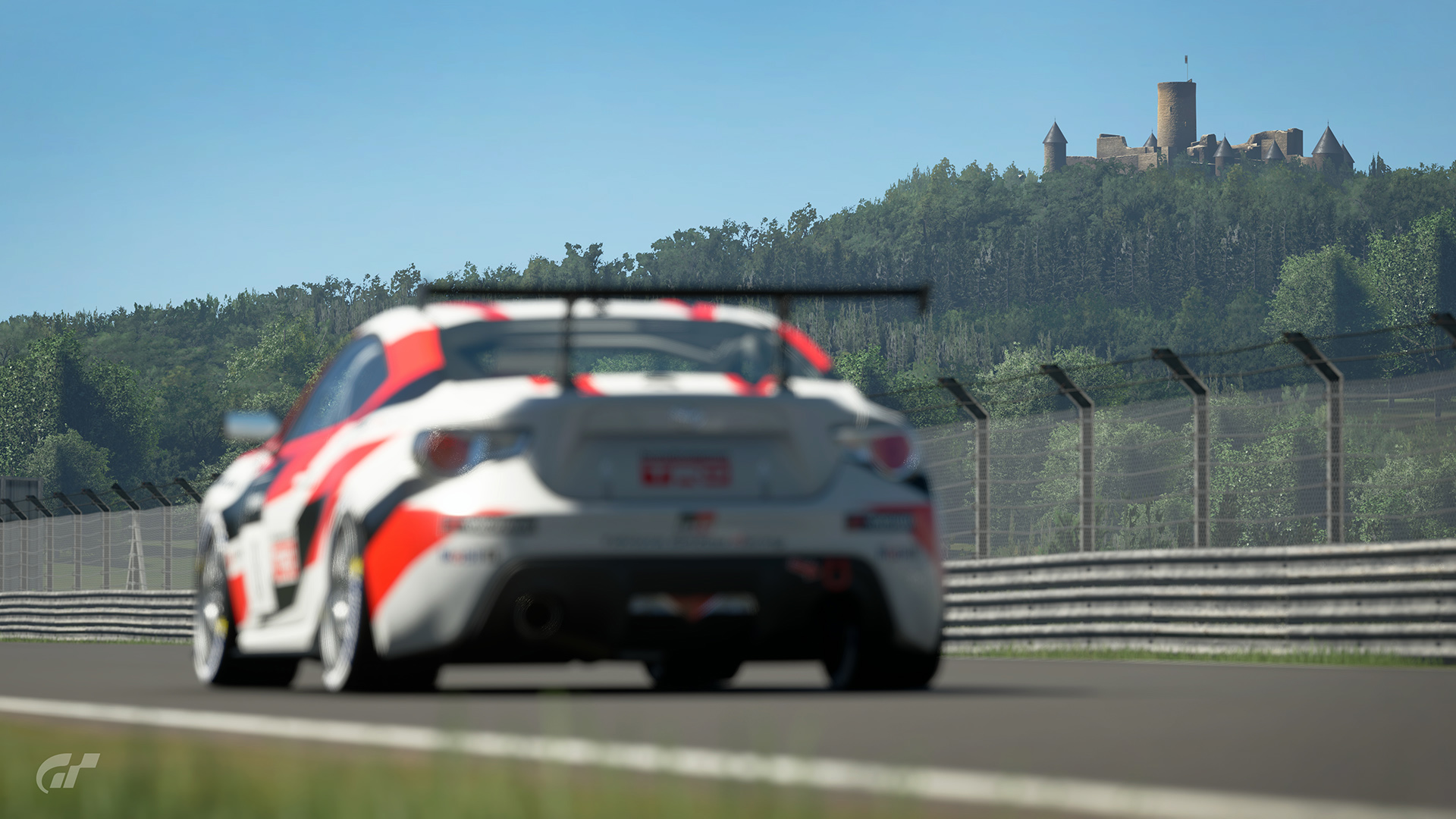 While Team Mazda led the field of 12 teams after Round 3, Toyota and Peugeot were hot on their heels. Team Toyota were hoping to move into contention to retake the Manufacturer Series title they won in 2019 at the all-important World Finals next month. For Team Peugeot, meanwhile, it was a case of signing off 2021 in style having failed to qualify for the World Finals via the second Online Series. All eyes were also on Porsche after their surprise win in the last round.

Because one lap around the Nürburgring Nordschleife is significantly longer than a traditional race circuit, this contest consisted of a mere four laps. Igor Fraga of Brazil (IOF_RACING17) scored pole position with a blistering time of 6’57.859” around the 20.8-kilometre course (12.9 miles) in the Toyota 86 Gr.4, edging out Japan’s Ryota Kokubun (Akagi_1942mi) in the Mazda Atenza Gr.4 by a tenth of a second. Positions 3 and 4 were occupied by Yuhki Araki of Japan (DW-yuhki02) in the Dodge Viper and Spain’s Jose Serrano (PR1_JOSETE) in the Porsche Cayman GT4 Clubsport. Unfortunately, Team Aston Martin’s race was over before it even began because Alonso Regalado of Peru experienced connection problems that kept him from participating. 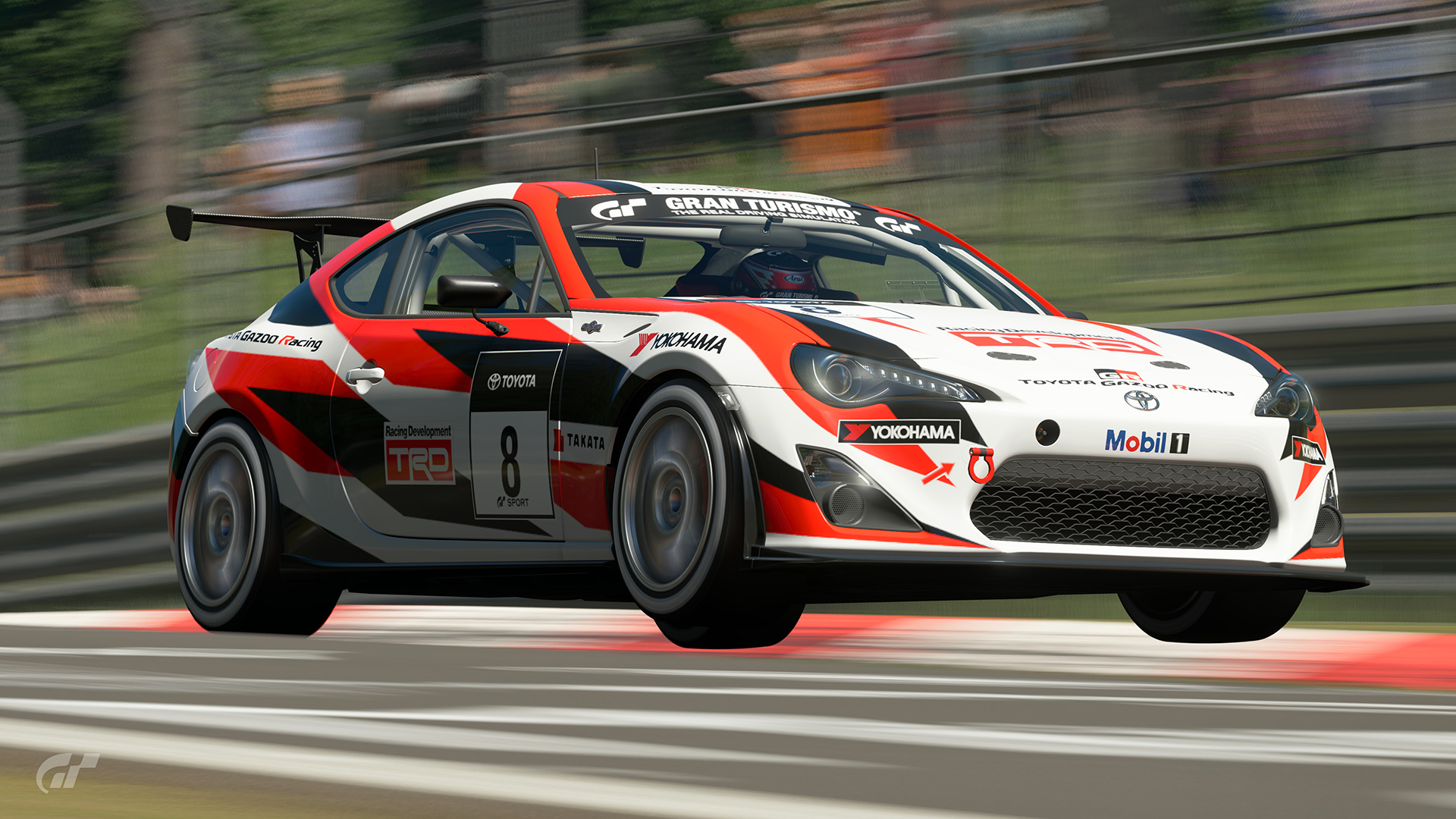 While driver changes weren’t required for this race, the players did need to pit at least once to change tyres and take on fuel.

Both Fraga’s 86 and Kokubun’s Atenza sped away cleanly from the standing start, leading the pack through the first of 154 corners that make up the Nordschleife. While there were no significant overtaking attempts during the first lap, Belgian Quinten Jehoul (ERM_Quinten) driving for Team Peugeot—which sat 2nd in the championship standings—lost control of his RCZ Gr.4, taking it off the track and kissing the guardrail, dropping him from 7th to 11th in the blink of an eye. While some threatened to overtake—including Serrano and his Porsche Cayman 2020 and Nations Cup champion Takuma Miyazono of Japan (Kerokkuma_ej20) in the Subaru WRX, in P4 and P5, respectively—most of the drivers were prioritising caution over position, at least for now. 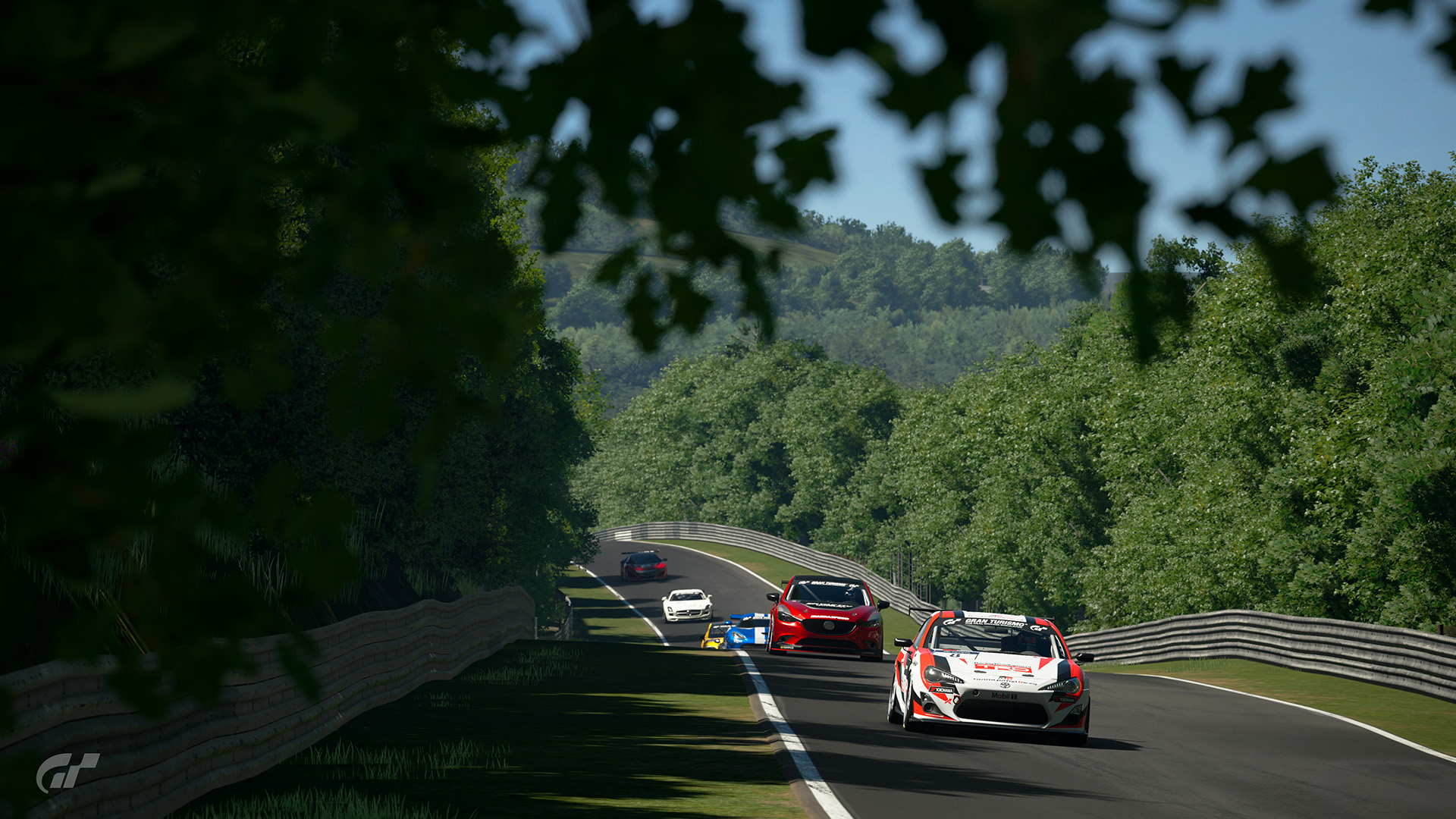 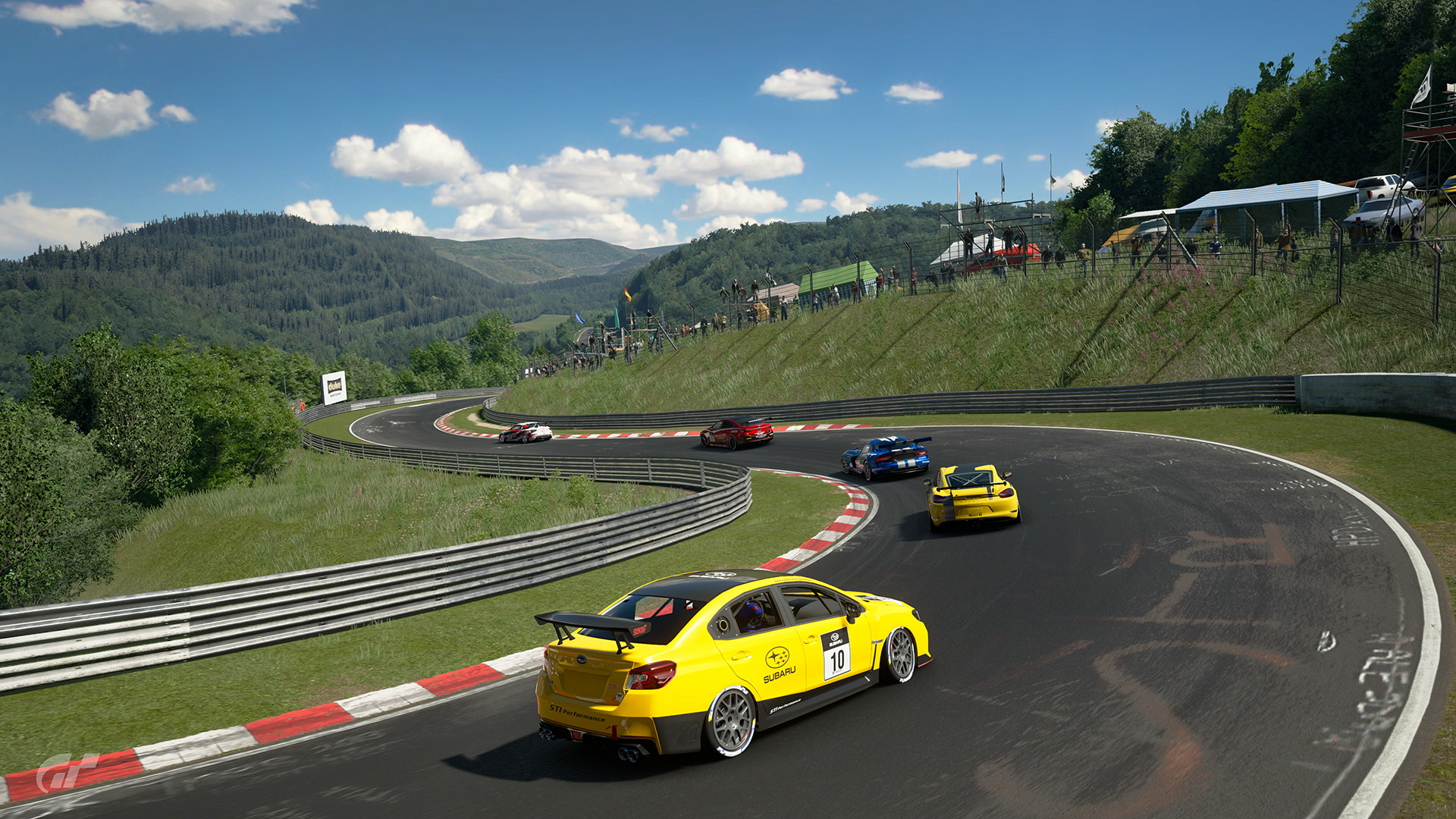 By the middle of the second lap, Fraga’s Toyota 86 began pulling away, opening up a two-second lead on the P2 car. Meanwhile, two Japanese drivers were duelling right behind him: Araki’s Viper hounded the Atenza of Kokubun throughout the first half of the lap. At the Kilometre 12 mark, on a section before the famous Carousel, Araki made a brilliant move to the inside, getting past the Mazda and taking over 2nd place. 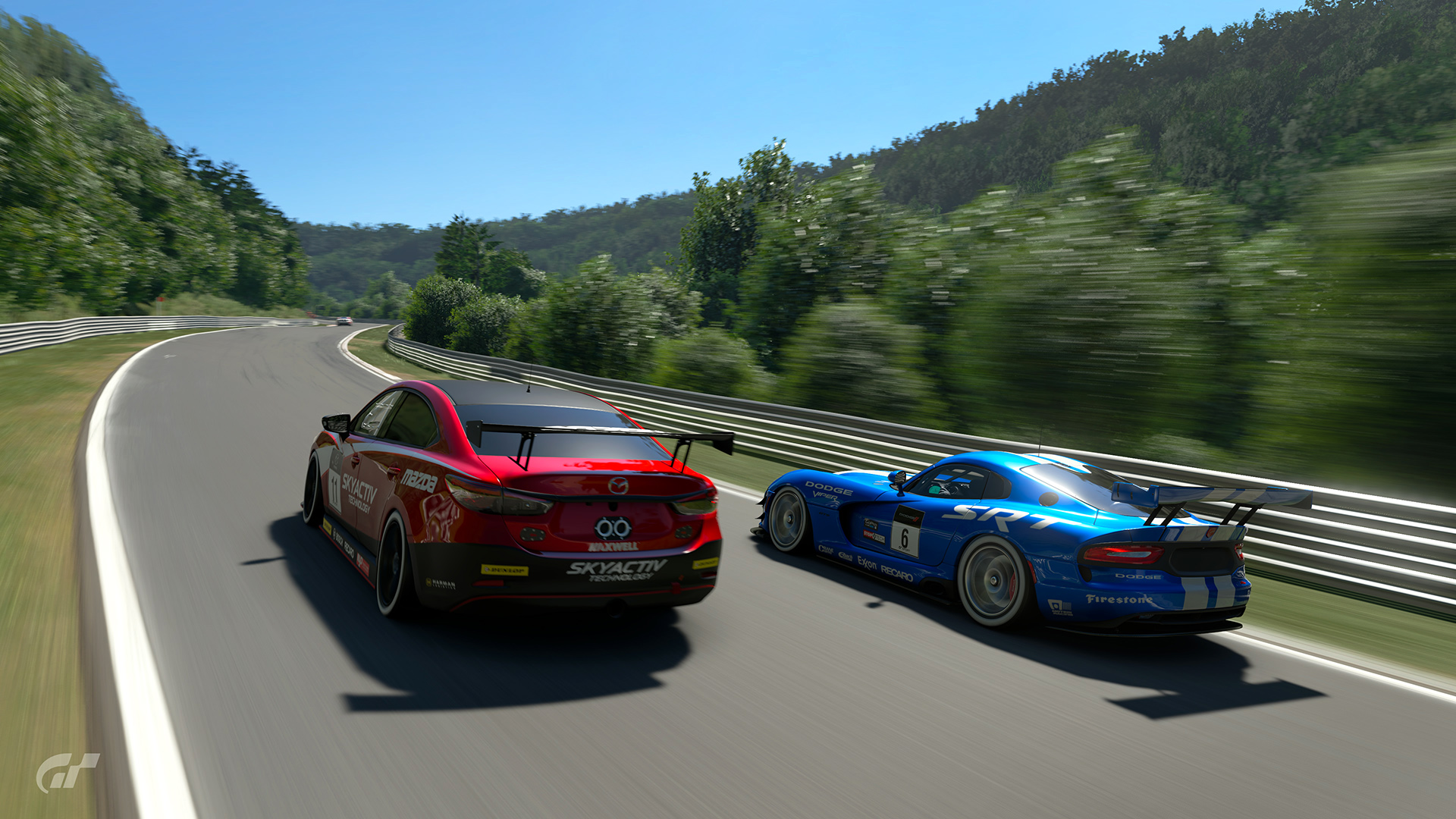 As the cars raced to the end of lap 2, reaching 260 km/h on the straight, most of the front runners made their pitstops; however, race-leader Fraga and 4th-place Serrano stayed out, hoping to build an advantage on their worn hard-compound Michelins. At the halfway point of the race, it was Fraga in the lead, with Serrano in 2nd and Miyazono running 3rd, but all three still needed to make their pitstops. Kokubun held the top spot among those who had pitted, running in P6. Clever fuel-saving tactics led to him being able to put 11 litres less fuel in his car than his nearest rival, Araki in P7, with the shorted pitstop leaving him five seconds ahead of his countryman. 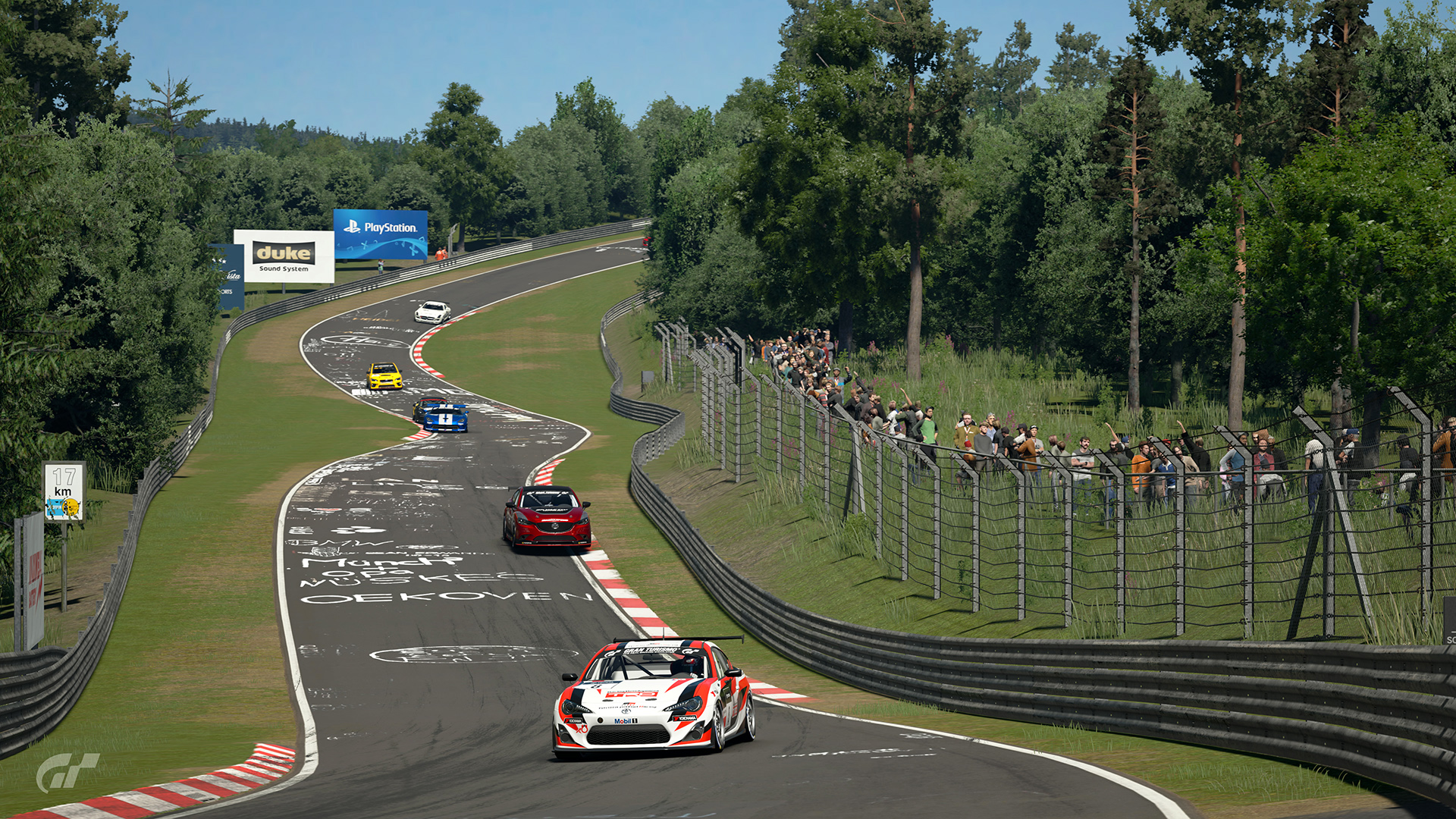 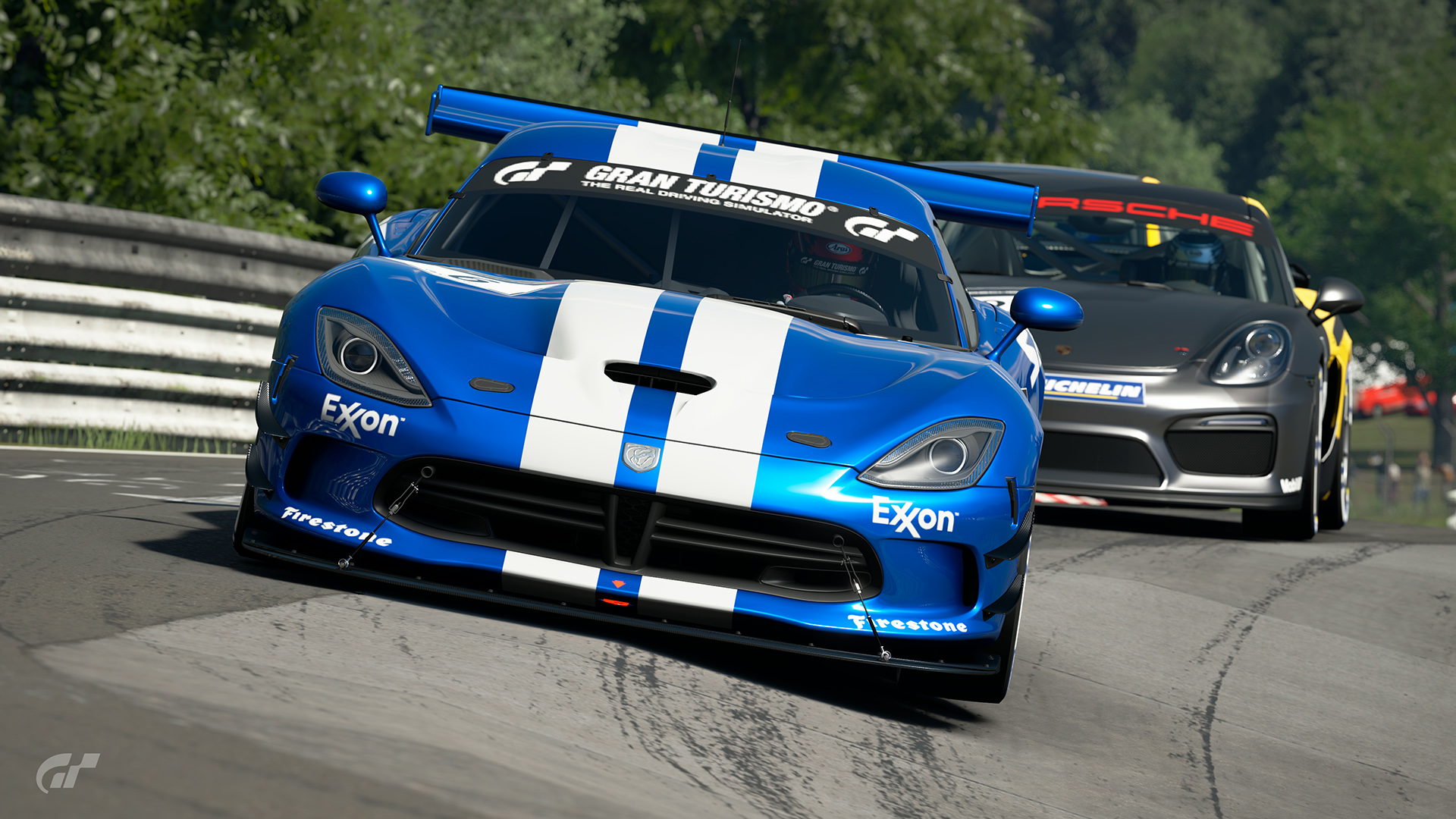 At the end of lap 3, Fraga, Serrano, and Miyazono came in. The question was, where they would find themselves when they returned to the action? Fraga had a lightning quick stop and managed to rejoin the race in the lead, while Serrano, who also had a great pitstop, managed to return in 2nd place, just in front of the hard-charging Mazda Atenza of Kokubun.

As the cars entered the final lap, it was all-or-nothing time with every driver throwing caution to the wind. First, Araki’s Dodge Viper climbed all over Miyazono’s Subaru WRX, while Kokubun was intent on getting his Mazda past Serrano’s Porsche. Araki moved past Miyazono at the Kilometre 11 mark to take over 4th place, while Kokubun patiently remained in the Porsche’s slipstream, waiting for the opportune place to pass. That place was the Kilometre 20 mark at the end of the long straight, right before the chequered flag. After getting past Serrano’s Porsche, Ryota Kokubun cruised to a 2nd-place finish, earning a valuable two points for Mazda, and keeping the Japanese manufacturer in the series lead going into the World Finals. Igor Fraga’s brilliant win put Toyota alongside Mazda at the top of the championship leaderboard, while Jose Serrano’s 3rd-place finish kept Porsche in 5th place. Despite not taking any points in Round 4, Peugeot and Subaru remained tied for 3rd. 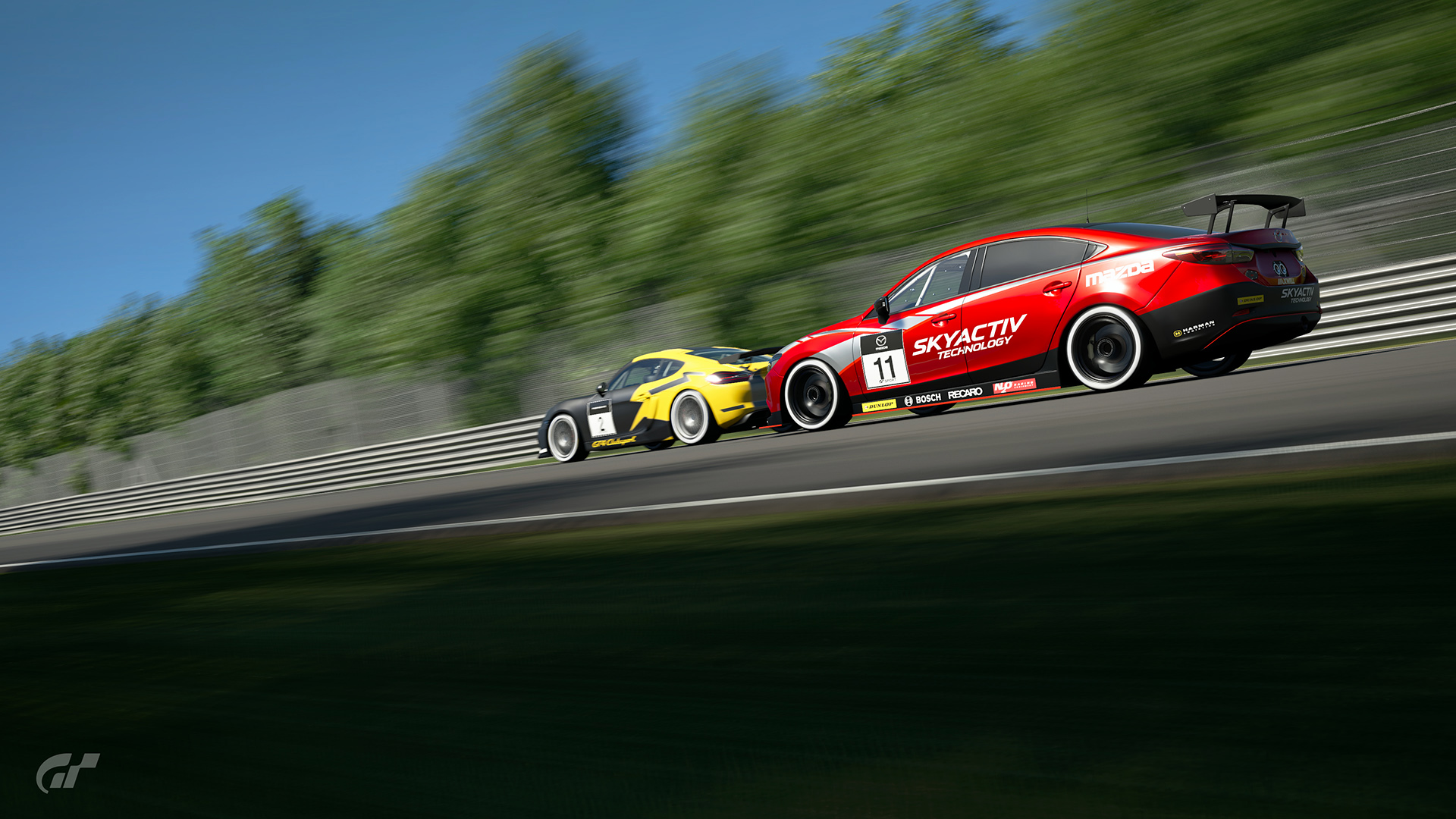 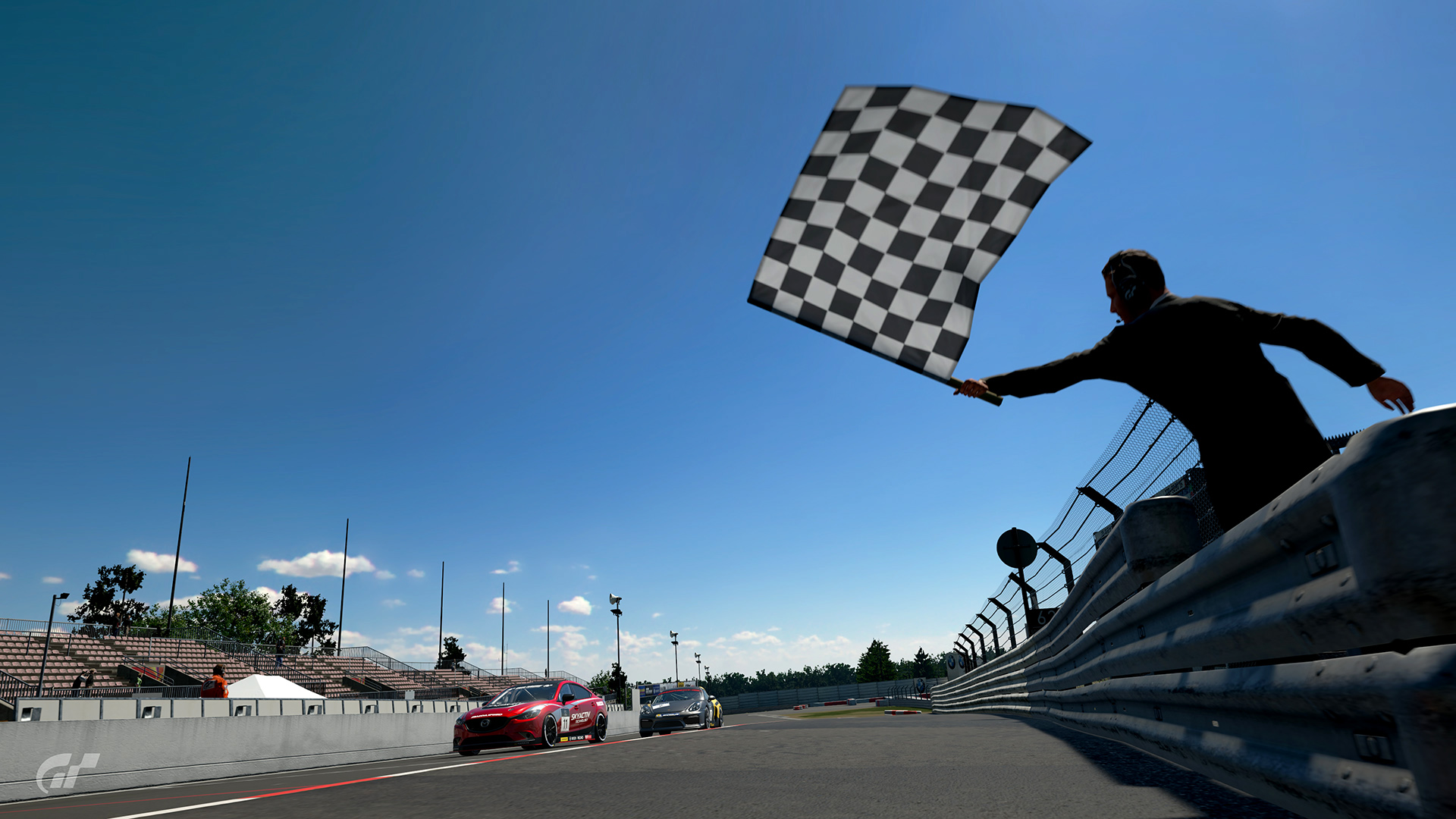 Despite having to make a skilful save after a small mistake on the final lap almost saw him spin, a delighted Fraga ended with pole, the fastest lap and the race win, commenting: “For the last race, I wasn’t happy with the tyre wear, but this time, with the overall race strategy, I’m very happy. I was a bit worried about fuel in the beginning because the other cars were drafting me, which made me push a bit harder so they couldn’t get into my slipstream. That resulted in me using a little bit more fuel than I wanted, but in the end, it worked out well, and I’m glad I finished in P1.” 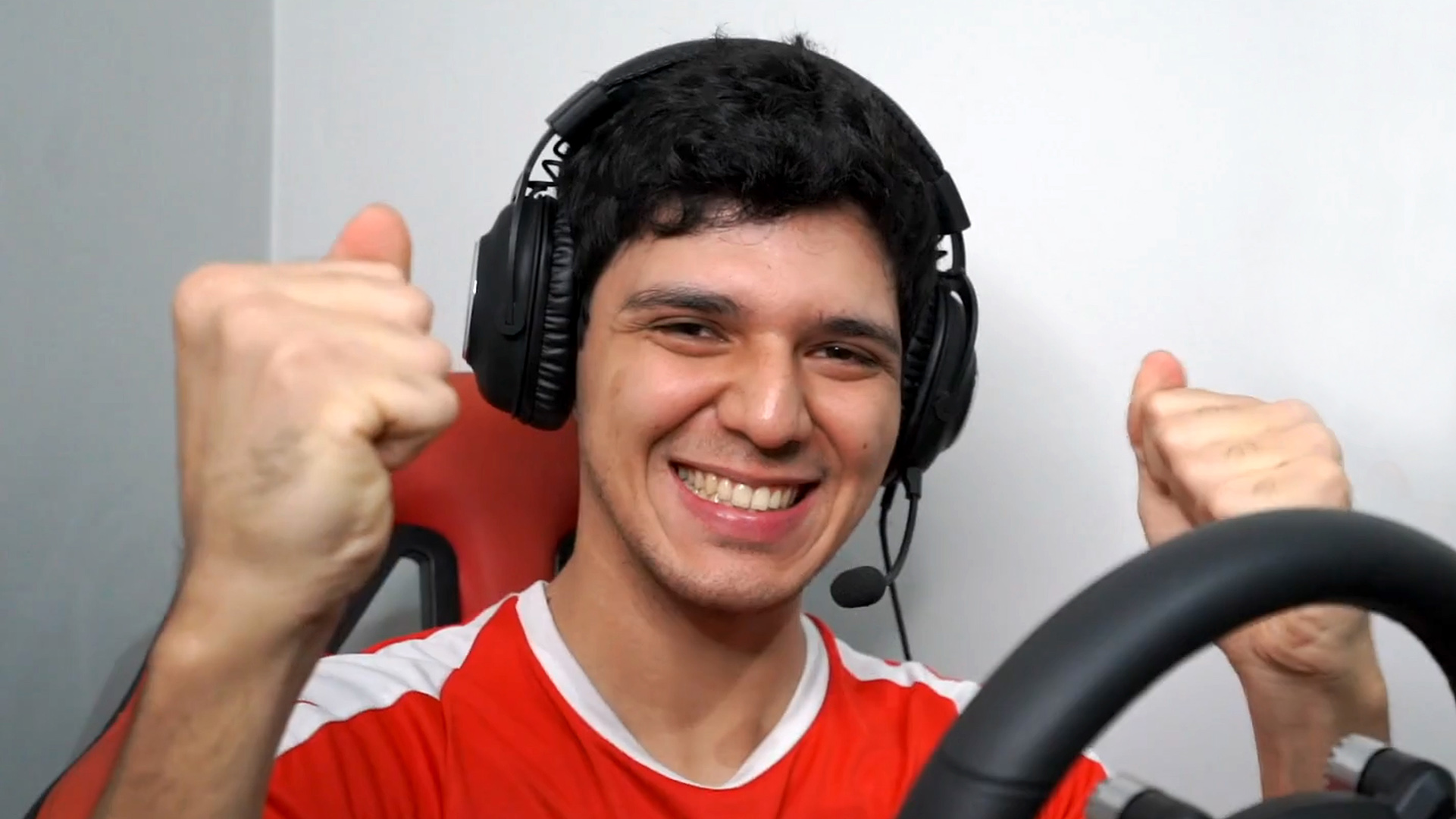 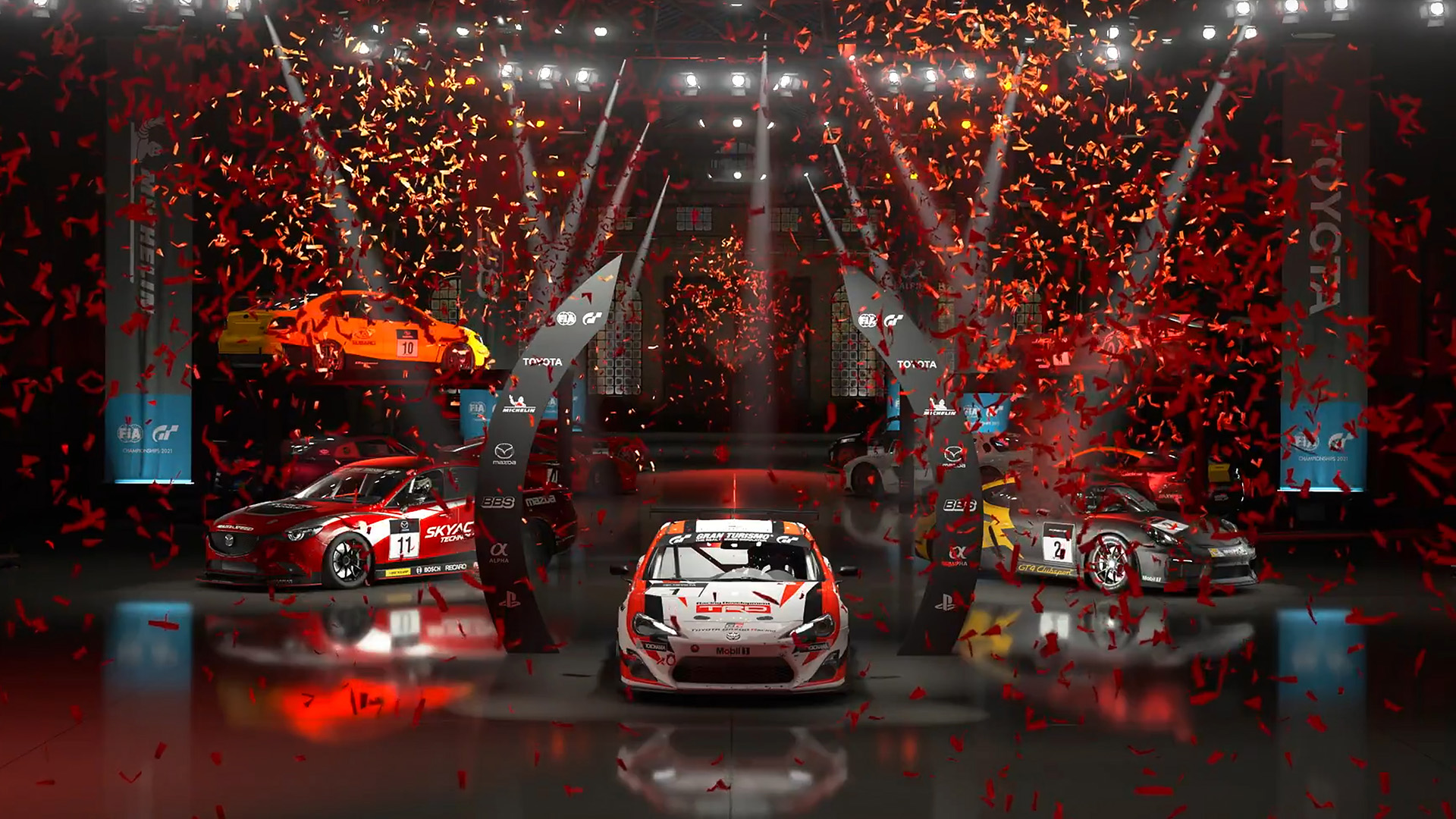 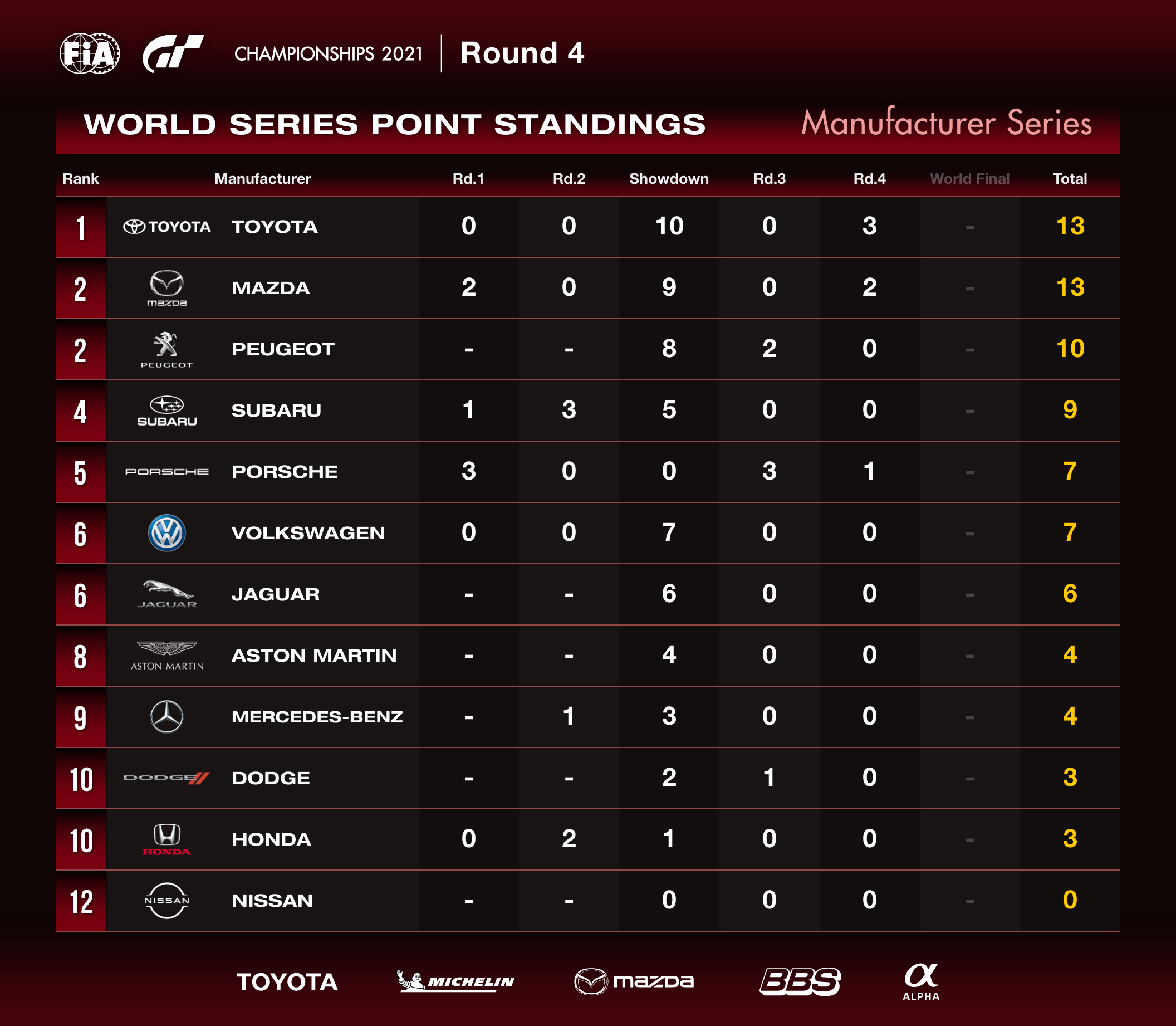 FIA GT Championships 2021 | World Series - Round 4
Who will get closer to the title at the end of Round 4?
The Best of the Best Go All Out To Take Maximum Advantage Into the World Finals
Tokyo, Japan (14 November, 2021) – As the FIA Certified Gran...