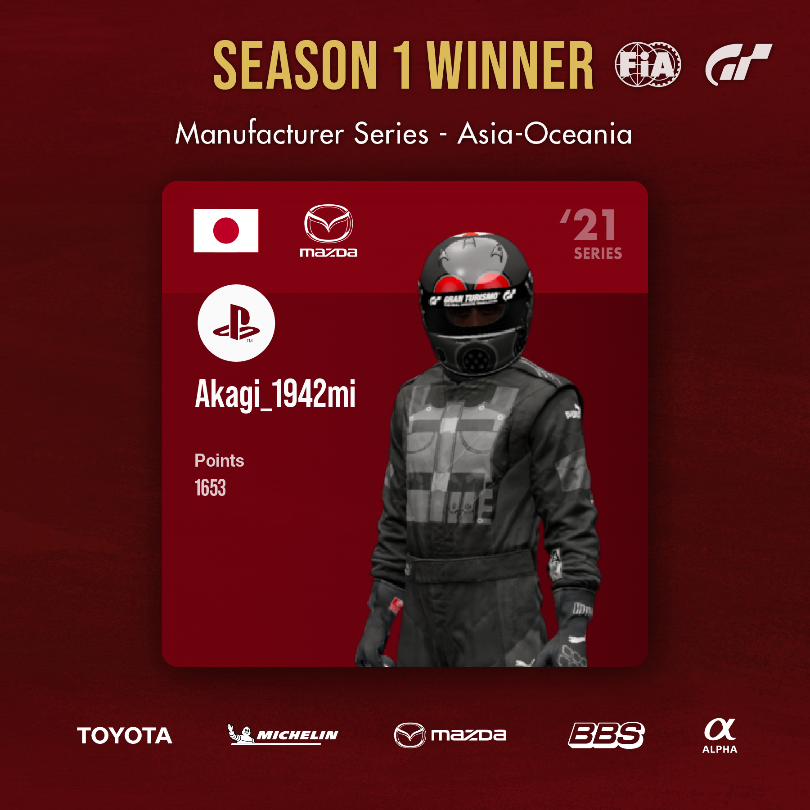 The series featured drivers from Asia and Oceania, and the much anticipated showdown between the two Japanese greats, Mazda's Akagi_1942mi and Subaru's Miyazono (Kerokkuma_ej20) did not disappoint.

The first round took place on the Circuit de Barcelona-Catalunya. This is a track very well suited for Akagi_1942mi's RX-​VISION GT3 CONCEPT, and the Mazda man was able to secure an impressive victory. Akagi_1942mi would also go on to win Round 2, but he wasn't the only one who performed impressively, with his Mazda teammate LG-TakuAn_LBC scoring over 400 points as well.

Miyazono was not about to give up, however. Round 3 took place on the Fuji Speedway, which is not a track with a reputation for suiting Subarus. Despite this, Miyazono blew his rivals away, scoring 430 points—the region's highest score of the season—and putting pressure on the Mazdas at the top of the leaderboard.

Both Akagi_1942mi and Miyazono missed Round 4, which allowed Toyota's veteran, Yamanaka (yamado_racing38), to claim the victory and move up the rankings.

Most of the leading drivers didn't enter Rounds 5 and 6, which gave Volkswagen's HIROGRAND_1009 a chance to shine—a nice moment for a driver that has been taking part in test races ever since GT Sport was first released.

The season entered its final stages, with the drivers taking on the Nürburgring's 24-hour layout in Round 7. All eyes were on Dodge's DW-yuhki02, a driver known as one of the best in the world at the Nürburgring. But DW-yuhki02 was not able to get the better of Akagi_1942mi, who started in 2nd grid and went on to win the race.

With a firm grip on first place after Round 7, Akagi_1942mi decided to sit out the rest of the races, ending his season on a high.

The last races of the season were notable for some fine performances from younger drivers, with Toyota's tokari71 and Mazda's LG-TakuAn_LBC picking up points in Rounds 8 and 9. Both drivers are too young to enter the World Series and the World Series Showdown, but if their performances against the elite drivers of the Manufacturer Series are anything to go by, they have very bright futures ahead of them.

With their combination of youth and experience behind the wheel, the Toyota and Mazda teams seem very well placed to challenge for the 2021 series title!