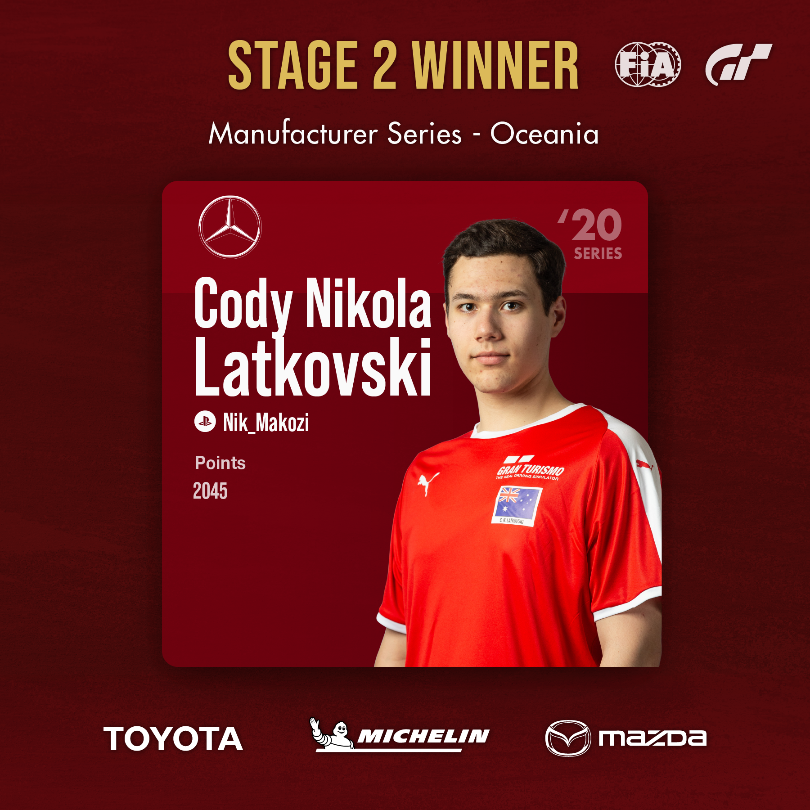 The stage was dominated by Mercedes-Benz's Latkovski (Nik_Makozi), who never looked like relinquishing his place at the top of the leaderboard.

Instead, the most exciting battle turned out to be for second place, with Ford's Wilk (Adam_2167) duking it out with BMW's McDonald (Keeden231), often taking it in turns to outperform each other from race to race.

The final race of Stage 2 took place on the Nürburgring's 24h layout, and featured Gr. 3 cars.

The leading pack all opted to start the race on medium tyres. Proceedings got underway in an orderly fashion, with no major position changes in the opening stages.
Before long, the top three of McDonald, Latkovski and Wilk had opened up a significant gap between them and the rest of the field. All three seemed content to feel each other out in the early stages of the race, and no ambitious overtaking manoeuvres were attempted.

Things started to get interesting on the second lap's Döttinger Höhe straight, with Latkovski making use of McDonald's slipstream to move into the lead. Wilk, on the other hand, was starting to slow down as a result of fuel consumption problems, and was soon lagging far behind the leading pair.

The top three drivers all took a pit stop ahead of the final lap. Having conserved fuel early in the race by staying tight behind McDonald, Latkovski was able to complete his refuelling and re-emerge onto the track in double-quick time.
This meant that a 1.3 second gap had opened up between him and McDonald in second place.
But McDonald wasn't done yet. On the final Döttinger Höhe straight, he adjusted his line in order to make use of Latkovski's slipstream. This meant that both cars were side-by-side heading into the final corner, but McDonald wasn't able to find an opening to overtake in the end, and did not force the issue.
Given the corner's reputation as the scene of numerous reckless and ruinous overtaking attempts, the drivers are to be commended for ensuring that their battle remained a clean one throughout.

In the end, it was another impressive victory for Mercedes-Benz's Latkovski. Despite not dominating the race, and only winning by a whisker in the end, his win meant that he remained top of the overall leaderboard at the end of the stage, with a huge gap between him and the rest of the drivers.