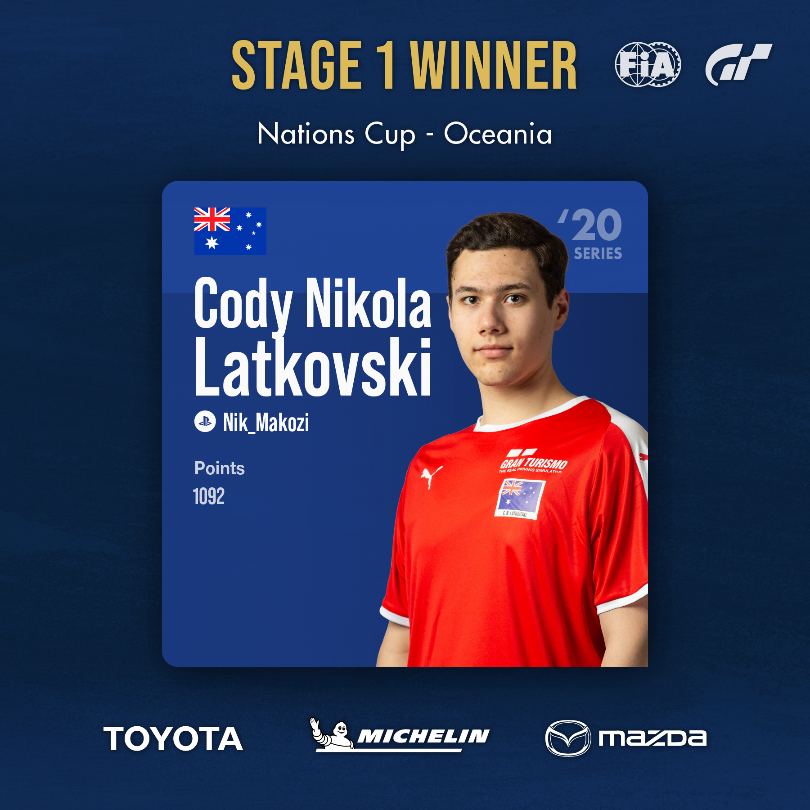 The first stage of the 2020 Nations Cup got underway on April 25th.
Australia's Latkovski (Nik_Makozi) dominated from start to finish, grabbing 354 points in Round 3 and 374 points in Round 7 along the way.

New Zealand's McEwen (AE_McEwen) and Australia's Simmons (MINT_Matt) also performed well, picking up enough points to keep the pressure on Latkovski, but they both fell short in the end.

The final race of Stage 1 featured Gr. 1 cars, and took place on the Circuit de Spa-Francorchamps.
Australia's Holland (MetalGear9493) suddenly burst into life during qualifying, claiming pole position. McEwen was next to him in second place, with Latkovski back in fourth.

Holland started on soft tyres, and was able to build up a lead over the chasing pack early on. McEwen had opted for medium tyres, and as a result started to lose ground as soon as the race got underway.

Latkovski, meanwhile, suffered an early stroke of bad luck. On the very first corner, New Zealand's Little spun out right in front of him, and he was unable to get out of the way in time. Latkovski had no hope of avoiding that collision, and therefore was not punished for it, but he then went on to push against Little after the latter had righted himself, and this brought him a three second penalty that saw him sink down to 11th place.

It looked as though it would turn out to be a rather easy race for the leader Holland—but soon enough Latkovski was scheming again. On the sixth lap, he switched from medium tyres to hard, then switched again to soft tyres on the very next lap. For his part, Holland waited until the eighth lap to switch from soft to medium tyres. Latkovski immediately started to put his new soft tyres to work, and by the 11th lap he had risen to fifth place.

On the final lap, Holland had to make a mandatory tyre change, switching to hard tyres. There didn't seem to be much risk in doing so, however, as he had a four second lead over the second-placed McEwan.

Sure enough, the pit stop and the final lap went without a hitch, and Holland was able to complete a very impressive pole-to-win victory. Latkovski finished third—a remarkable achievement considering that he had been in 11th place after his early accident.

Despite not being able to win the final race, Latkovski's huge point totals in earlier rounds ensured that his overall stage victory was assured. Much like in the Manufacturer's Series, however, there are signs that his dominance is being challenged. Once upon a time a Latkovski pole position was a formality. Not any more...